A leading think tank has proposed a number of tax reforms that could provide a radical shake up of the UK tax system.

The Institute for Public Policy Research (IPPR) is a centre-left think tank that has a long history of influencing Labour Party policy. So, its ideas on tax reform published in the final report of its ‘Commission on Economic Justice’ are of more than just academic interest.

Income tax and national insurance reform– The IPPR propose combining income tax and national insurance contributions (NICs) into a single tax, applicable to all income, including investment income. They would replace the current system of incremental tax bands with a gradually rising rate applied to all taxable income, capped at a maximum 50% marginal rate above £100,000. Their proposal would smooth out inconsistent marginal rates, as the graph shows. 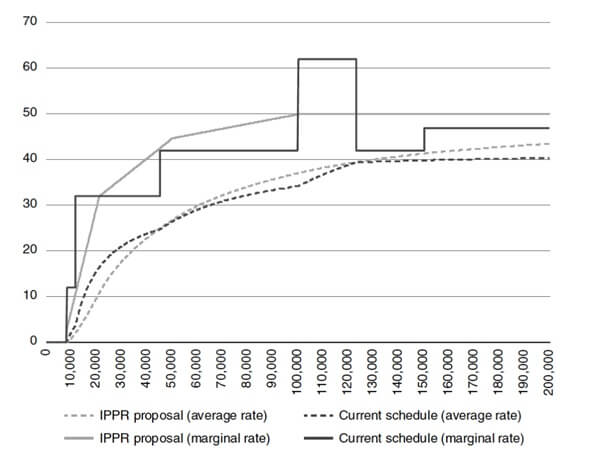 Inheritance tax reform (IHT) – The IPPR supports the recent proposals from the Resolution Foundation to abolish inheritance tax. The IPPR would replace inheritance tax with a lifetime gifts tax, payable by the recipient of a gift or legacy (other than a spouse or civil partner) – currently IHT is usually paid by the estate. Income tax rates would apply once a lifetime receipts allowance of £125,000 has been reached. According to the IPPR, this tax structure would raise much more than inheritance tax, as it would largely remove the benefit of making gifts during lifetime.

Capital gains tax reform– The IPPR propose abolishing “most exemptions”, other than for the main residence. Capital gains would instead be taxed at income tax rates, implying a maximum marginal rate of 50% under their proposed income tax structure. Taxing capital gains as income is not a new idea – it was a practice previously introduced in the late 1980s, by the Conservative Chancellor, Nigel Lawson.

Corporation tax reform– Instead of cutting the corporation tax rate from 19% to 17% in 2020, the IPPR proposes increasing the rate to 24%, with business reliefs and allowances ‘simplified’ (i.e. cut back) to broaden the tax base. To tackle multinational tax avoidance (a practice associated with the FAANS companies, Facebook, Apple, Amazon, Netflix and Google), the IPPR proposes an alternative minimum corporation tax, pro-rating global profits to the proportion of global turnover in the UK.

These wide-reaching proposals are unlikely to be implemented exactly as the report proposes. But if we do see a Labour government, the IPPR could become more relevant, quite quickly.

The Financial Conduct Authority does not regulate tax advice.

How well do you understand inheritance tax?

A survey by HMRC published in…