The Government has revived plans to raise probate fees in England and Wales.

A new, banded structure for probate fees in England and Wales is to be introduced, according to a written statement issued a week after the 2018 Budget by the Parliamentary Under Secretary of State for Justice.

The announcement comes after the absence of inheritance tax (IHT) reforms in the Budget, despite the Chancellor commissioning a review by the Office of Tax Simplification in January 2018. The only change to IHT announced in October was a small adjustment to the legislation for the residence nil rate band – this being such a complex piece of legislation, it had been wrongly drafted.

If new probate fees sound familiar, it is because a very similar announcement was made in March 2017. At the time the proposal provoked widespread criticism, because the higher levels were seen to be more of a new tax than a simple fee adjustment. In the event the planned change fell victim to the legislative logjam around the last General Election and disappeared.

Since then, The Government has taken on board some of the original criticism and cut the fees they are proposing, particularly for larger estates: 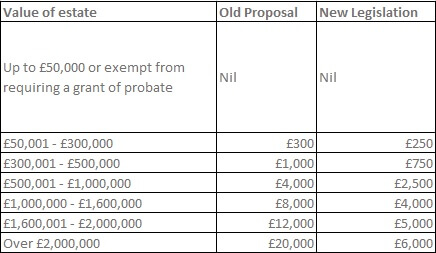 The new fees are currently scheduled to come into effect 21 days after the legislation is passed, and there is very little that can be done to mitigate the impact. They are payable even if the estate passes with no IHT liability, as is usually the case on the first death of a married couple or civil partners, or if the value of the estate is covered by the available nil rate and residence nil rate bands.

There are still opportunities to save IHT with careful planning and, as the Budget made no significant changes, there remains a window of opportunity before any reforms are introduced.

The Financial Conduct Authority does not regulate tax or trust advice.

Shake up your New Year’s resolutions

The time to resolve has returned.…