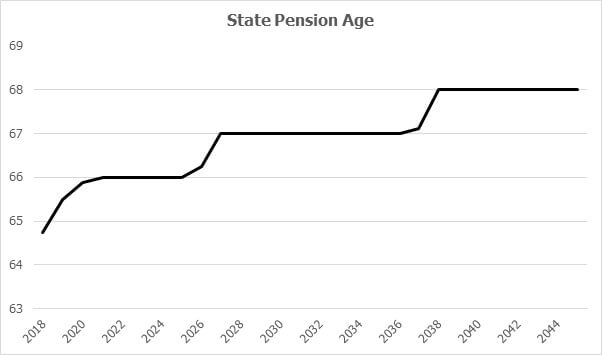 Having reached this landmark, the next stage of SPA increases has already started. For both men and women, the State Pension will become payable for anyone born between 6 December 1953 and 5 January 1954 on 6 March 2019. The SPA will then be increased to reach age 66 by October 2020.

The SPA is scheduled to rise again as existing legislation already covers the increase from 66 to 67, phased in over two years from April 2026. The same legislation provides for a step up to 68, starting in April 2044.

However, in July 2017 the Department for Work and Pensions announced it would accept the recommendations of the Cridland Review – this brings the start of the move to a SPA of 68 forward to April 2037. Legislation for this change has been deferred until after the next SPA review in 2023 – raising the SPA in the current political conditions could prove difficult for the government – but your SPA will be at least 68 if you were born after 5 April 1971.

The rising SPA is linked to historic improvements in mortality – in effect the state pension increases match the increases in life expectancy at age 65 of 8 years for men and 9 years for women since the early 1950s.

The arrival of the equalised SPA provoked a fresh round of protests from women born in the 1950s, who started working life with an expectation that their State Pension would be payable from age 60. The government has previously made a minor concession on the phasing of the change but further offers are not expected. The simple reason is cost: a higher SPA reduces government pension expenditure and raises extra National Insurance Contribution revenue.

If you want to retire when you choose, rather than when the State decides, make sure your private pension provision is adequate.

For more information about our retirement planning service click here

The value of your investment can go down as well as up and you may not get back the full amount you invested.

Understanding the cost of delay with pension planning

No one is certain whether it…

Until recently benchmarking services were unaffordable…