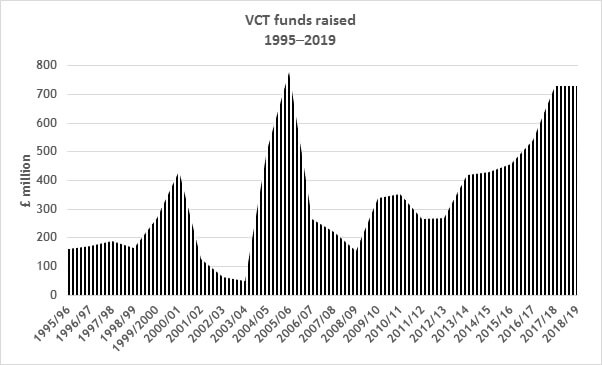 The Association of Investment Companies was quick off the mark after 5 April in announcing a near record level of fund raising for venture capital trusts (VCTs) in 2018/19. At £731m, 2018/19 VCT investment just beat the 2017/18 figure by £3m. The improvement is more impressive than it sounds because in 2017/18 there was a surge of interest ahead of widely anticipated changes to the VCT rules, which subsequently emerged in the autumn 2017 Budget. The best year for VCT capital raising – the sharp spike on the graph – was 2005/06, which was the last year in which income tax relief for investment was at 40%.

The 2018/19 inflow to VCTs is somewhat surprising as those 2017 Budget changes have made fresh investment by VCT managers higher risk than it used to be. The focus is now firmly on young growth companies, which may need a series of capital injections as they expand, rather than a one-off investment. For now, the impact on returns have benefited from established VCTs raising funds for some years and thus have portfolios built up under past, less restrictive VCT investment rules.

These VCTs may still hold investments in management buyouts and long-established companies that required capital for expansion. As those old holdings are liquidated, performance could become more volatile, reflecting the higher risk nature of the more recent acquisitions.

The attraction of VCTs, which must be set against those risks, is tax relief:

If your opportunity to invest in pensions is limited by the annual and/or lifetime allowances, that 30% up front tax relief has an obvious attraction.

Although the end of tax year VCT season is over, there are a range of VCTs seeking to raise funds early in the new tax year. Please contact us to discuss your options.

VCTs are high risk investments and there may be no market for the shares should you wish to dispose of them. You may lose your capital.

The value of tax reliefs depends on your individual circumstances. Tax laws can change. The Financial Conduct Authority does not regulate tax advice.

The value of your investment can go down as well as up and you may not get back the full amount you invested. Past performance is not a reliable indicator of future performance. Investing in shares should be regarded as a long-term investment and should fit in with your overall attitude to risk and financial circumstances.

Saudi Arabia: the next emerging market

The June 2018 review of constituents…

The arrival of the new tax…