Professional investor interest has been focusing on US government bond yields, with potential lessons for long term investment. 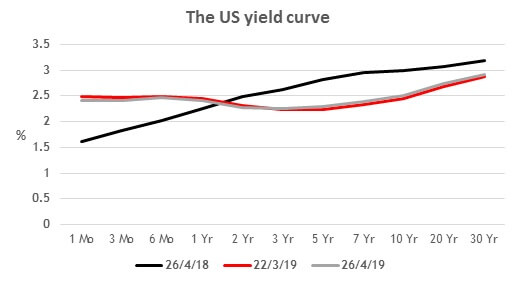 On 22 March the US stock market caught a sudden – and brief – chill.  One of the main reasons was the red line in the graph shown above.

This shows a yield curve plot, which shows the return an investor would receive from buying US Treasury securities, based on their term to maturity – from one month to 30 years. What happened on 22 March was that the yield on 10-year Treasury bonds fell below that of 3-month Treasury bills.

Usually the longer the term to maturity, the higher the yield, as demonstrated by the black line on the graph, which dates from one year ago. Intuitively that makes sense – the longer the period of time money is lent, the greater the risk that inflation will emerge to erode returns, so the higher the interest rate demanded.

History has shown that when yields fall with lengthening maturities – described as an inverted yield curve – a recession is imminent. The logic is that investors will accept a lower return from longer dated bonds because they anticipate short term rates will be cut to counter the impact of the recession. In the US, the reverse yield curve has a very good track record as a warning flag, which explains the stock market’s reaction to the news.

Whether yield curve movements have retained their predictive capacity is now the subject of some debate. There are those who believe that central bank actions since the 2008 financial crisis have so distorted the bond market that the yield curve can no longer be trusted. On the other hand, there are experts who worry about the credibility of any ‘This time it’s different’ message.

However, as the graph shows, the inversion has started to fade since March, meaning it may just have been a short-term blip. Certainly, US stock market investors seem to have recovered their nerve, with the main equity market indices at or near all-time highs as April came to an end. Once again, Wall Street has proved resilient in the face of short-term investment ‘noise’. Which is a lesson for all investors.

The value of your investment can go down as well as up and you may not get back the full amount you invested. Past performance is not a reliable indicator of future performance. Investing in shares should be regarded as a long-term investment and should fit in with your overall attitude to risk and financial circumstances.

One more twist on buy to let

Buy-to-let investors will be hit by…

Venture Capital Trusts have started their…