The latest statistics from HMRC show the inflows to venture capital trusts (VCTs) have more than doubled since 2009/10. 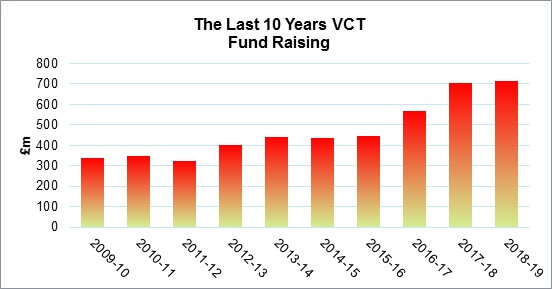 At the end of last year, HMRC published details of how much money was raised by VCTs in 2018/19. At £716m, the figure was the highest since 2005/06, when a temporarily higher rate of tax relief was on offer.

The increased popularity of VCTs in recent years is at least partly due to the restrictions on pensions, such as the tapered annual allowance rules. The tightened pension limits have made pension contributions tax in-efficient for some high (and not so high) earners.

While VCTs are being used as a pension alternative to obtain tax relief, in investment terms VCTs are very different. Your choice of pension investments is almost limitless and can be as high risk or secure as you wish. In contrast, a narrow investment choice and high risk are both inbuilt to VCTs.

At least 80% of the investments underlying VCTs must be in relatively young, small companies that are not listed (other than on the AIM market). Over the years, successive Chancellors have ratcheted up the risk element by excluding a wide variety of businesses, from market gardens to wind farms.

The latest change to VCT investment rules took effect in April 2018 and introduced a specific ‘risk to capital’ requirement to prevent ‘safe’ investments being made. That high risk focus makes it all the more important to take advice when investing in VCTs.

With the Budget now in March, the year end season for VCT capital raising is well underway. Some VCTs have already closed their issues for the year, so if you wish to invest in VCTs to cut your 2019/20 tax bill, the sooner you act, the better.

The value of tax reliefs depends on your individual circumstances. Tax laws can change. The Financial Conduct Authority does not regulate tax advice. The value of your investment can go down as well as up and you may not get back the full amount you invested. Past performance is not a reliable indicator of future performance. Investing in shares should be regarded as a long-term investment and should fit in with your overall attitude to risk and financial circumstances.

Understanding what goes in to the FTSE 100

The latest quarterly review of the…

Complying with the law for trans…

The intestacy rules for England and…