The Bank of England’s chief economist, Andy Haldane, suggested in mid-May that negative interest rates were one possible response to the economic fallout from Covid-19. 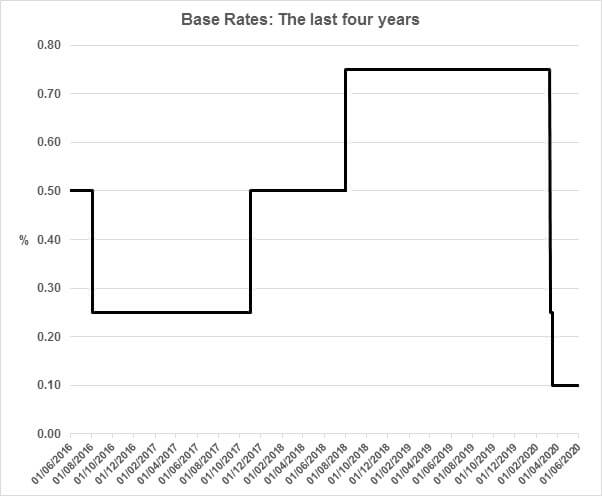 The comment was surprising because in the past the Bank has been opposed to the idea that its base rate could fall below zero. However, shortly after Mr Haldane’s comment, the Bank’s Governor, Andrew Bailey, said when asked about negative rates “we do not rule things out as a matter of principle”.

Negative interest rates – where the lender pays the borrower interest – may sound a bizarre concept, but they are nothing new. The eurozone, Switzerland and Japan have been living with sub-zero rates for some while. The aim behind negative rates is not, as many Germans feel, to punish small savers, but rather to encourage commercial banks to lend. For those banks, negative rates means that leaving reserves in the central bank costs them hard cash – 0.5% a year at the European Central Bank – whereas if they put the money to work in loans to businesses and individuals, the banks can earn interest. With rare exceptions borrowers have not been paid for taking on debt once the lender has added their margin on to the loan.

Where central banks have introduced a base rate, the commercial banks have been reluctant to pass the negative element on to all but the largest of their depositors. Usually deposit rates have been set at zero, avoiding the problem of savers watching the bank gradually reduce their savings. Many deposit rates in the UK are virtually at 0% anyway – it can be an exercise to count the trailing zeros before the figure 1 or 5 is reached.

Ironically, the best instant access account at present comes in the form of National Savings & Investments Income Bonds, which pay 1.16% AER. National Savings announced in February that it would be cutting rates on these bonds by 0.45% from 1 May, but then had a change of heart in mid-April. That might be a reflection on the government’s Covid-19 driven borrowing requirement.

If you want an income return of more than 1% from your capital, there are still plenty of options, but your capital will be at risk. For more information, take a positive step and talk to us.

The value of your investment, and the income from it, can go down as well as up and you may not get back the full amount you invested.

Interest rates back on the slopes

In September the US and European…

Should you review your pension fund withdrawals?

The fall in world stock markets…

The Autumn Budget may have been…