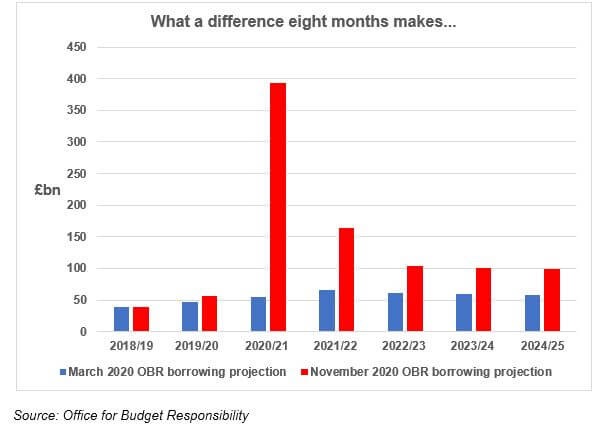 The UK budgetary cycle is in something of a mess at present. In 2019, unusually there was no Budget thanks to December’s general election. For the same reason, the three-year Spending Review which should have accompanied the Budget was abbreviated to a one-year Spending Round. Just as unusually, it was presented by a Chancellor, Sajid Javid, who never got to deliver a Budget.

His successor, Rishi Sunak, did present a 2020 Budget in March, but abandoned plans for an Autumn 2020 Budget because of the uncertainties caused by the pandemic. He was also due to deliver a three-year Spending Review this autumn, but Covid-19 meant that, once again, the timeframe was shortened to twelve months.

The one-year review emerged on 25 November alongside the latest Economic and Fiscal Outlook projections from the Office for Budget Responsibility (OBR). The OBR’s last Outlook had been published on 11 March, coincidentally on the day that the World Health Organization declared Covid-19 to be a pandemic.

The OBR’s November calculations were dramatically different from those it produced in March. Whereas in spring the OBR had forecast that the government would borrow £55bn in the current financial year (2020/21), by November that figure had risen to £394bn – the tall red column on the graph. Over £280bn of that extra borrowing can be attributed to the costs of dealing with the pandemic. In 2021/22, a further £55bn will be spent dealing with Covid-19, pushing up that year’s borrowing to nearly £165bn.

While the Chancellor detailed a raft of spending measures for the coming financial year, he said very little about tax. The nearest hint was to comment ‘…we have a responsibility, once the economy recovers, to return to a sustainable fiscal position”. The OBR was slightly less obtuse, noting that “even on the loosest conventional definition of balancing the books, a fiscal adjustment of £27 billion … would be required to match day-to-day spending to receipts by the end of the five-year forecast period”. That would equate to an increase of over 11% in income tax receipts – the largest single source of revenue.

The spring 2021 Budget – assuming it is not deferred – is likely to be when Mr Sunak starts talking tax increases. Now is the time to focus on your year end tax planning.

Tax laws can change. The Financial Conduct Authority does not regulate tax advice.

One more twist on buy to let

Buy-to-let investors will be hit by…

A bumpy ride for August on the markets

Stock markets, as well as some…

Factor inflation into your planning cycle

Inflation has fallen to its lowest…