June was a month for rising interest rates on both sides of the Atlantic. 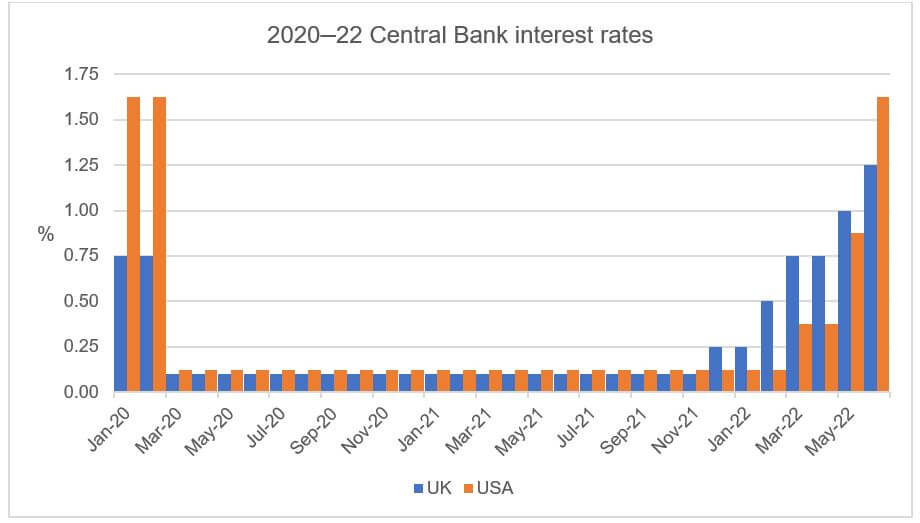 June was a notable month for interest rates:

The actions of both central banks were driven by the same factor – surging inflation. In May, US CPI inflation was 8.6%, while in the UK it was 9.1%, both four-decade highs. The Bank expects UK inflation to be ‘slightly over 11%’ by October, when the next adjustment to the utility price cap takes effect. Perhaps wisely, the Fed does not project CPI inflation.

Neither bank surprised the markets with their rate increase. Central bankers do their best to avoid spooking markets and are masters of telegraphing intentions. The forewarning did not mean investors were happy when confirmation arrived. The worry on both sides of the pond is that the upward march of interest rates will lead to a recession. This is neatly summarised in a view from one billionaire investor that rates will go on rising “until something breaks”.

For investors, these are uncomfortable times. Values are generally falling, albeit not in a straight line. Some sectors – such as energy – have been doing fine, while others – loss-making tech companies, for example – have dropped faster than the overall market. If you think you can catch any of the movements, just cast your mind back to March 2020, very early on in the pandemic. Both the US and UK stock markets hit their lows at that point: in March 2020 there were no vaccines available and COVID-19’s worst impact had yet to arrive. It is only easy to spot a perfect time to invest in retrospect.

The value of your investment and any income from it can go down as well as up and you may not get back the full amount you invested.

Key points from the Summer Statement

The impact of raising the State pension age

New research shows how the most…

A game of two halves? 2022’s rollercoaster for…